Hasbro: Taking Scrabulous Away May Not Be Enough 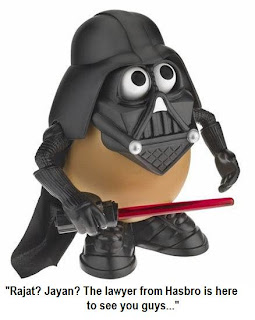 Once, a long time ago, I was in a Labatt's Beer focus group. I got twenty bucks and a free beer out of the deal. I doubt that Labatt's took my answers to heart ("which of these abstract blue splashes makes you want beer more?") but I understood the process. In an effort to sell more beer, the beer company wanted to find out what beer drinkers really want.
Apparently, no one at Hasbro has that kind of corporate savvy.

In light of the hideous Facebook debacle over Scrabulous and/or Scrabble, I can only draw the conclusion that Hasbro, in raging stereotypical corporate style, is unintentionally bulldozing customer's goodwill in a short-sighted defense of their perceived interests.

(Unless of course this was one of those spooky "let's screw up the brand so the stock price drops and we can sell out" deals. Very few things surprise me anymore.)

Peter Fader, a co-director of The Wharton Interactive Media Initiative, says Scrabulous "has been such a fabulously good thing for the Scrabble franchise [that] Hasbro should have been celebrating."

Hasbro has made some improvements to their official Facebook version of Scrabble since its disasterous premiere... but it still (for the most part) sucks, and all the criticisms about its functionality are still valid. I know, because they fixed the ability to log into it in the forst place. And it still sucks. That's why I'm spending more time on Scrabulous.com, and less on Facebook. Thanks for helping to break that Facebook addiction of mine, Hasbro chumps!

So why the fresh ranting about all this? Because... just in case you were afraid common sense was going to suddenly start becoming a factor in Hasbro's decision-making process... the PR geniuses there are currently "declining to say" whether or not they intend to sue Rajat and Jayan Agarwalla over Wordscraper... their new and not-as-similar-as-you-might-think word game on Facebook.

Wow, Hasbro, you guys sure are... consistent. Just like I will be staying consistently away from your products until you show a few signs of smartening up and not being such pinheads.
.
Posted by Matthew The Astrologer at 10:08 AM