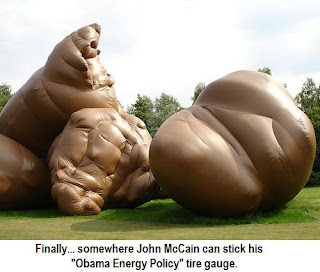 1) An installation by American artist Paul McCarthy (best known for such works as "Santa Claus With A Butt Plug") broke loose from its moorings at The Paul Klee Centre in Berne, Switzerland, taking out a power line and finally coming to rest next to a children's home, smashing a window.

The installation, "Complex Shit," is an inflatable turd the size of a house.

2) Republican Presidential candidate John McCain (you know, the maverick who doesn't vary from the neocon agenda any more)has begun to rant about getting rid of "pork barrel" budget items... things with special funding requests for specific projects attached to larger bills. The average cost for such earmarked items is 1.3 million dollars each... a pittance in Federal budgetary terms.

It will be a nice excuse to ignore crumbling levees and collapsing bridges, which after all aren't very sexy.

Posted by Matthew The Astrologer at 10:36 AM