Sarah Palin, Harbinger Of The Apocalypse 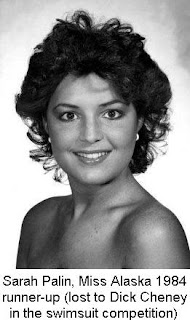 As someone who has sat back and watched US Federal politics for a long time, and as someone who has prayed for the change I had hoped Barack Obama would bring, I am now officially putting my hopes for a better world in the freezer for the next few years.

Why? For two reasons:

1) As one analyst after another on the tube today is saying-but-not-saying, White Woman trumps Black Man. Those Americans who simply can't stomach the notion of a black guy in the White House can make themselves feel better by voting for a white woman.

Of course, these are the same people who would have justified voting for a McCain/Mitt Romney ticket, or McCain/Pawlenty, or McCain/Sock Puppet for that matter. But because it's a woman, everyone can act like they're all progressive an' shit.

Trust me, no one with the Republican Party is going to bitch about Palin's lack of experience... a little under two years as a Governor. Sure, they bitched about Obama's "lack of experience," but of course he's playing for the wrong team.

If/when elected, Sarah Palin will be the least politically-experienced VP since Spiro Agnew.

(There's a line the Dems should play up. Just like Bush kept bashing away with "evildoers," "Spiro Agnew" should be the soundbite du jour. But do they have the imagination for it?)

...But I'm sure Sarah Palin has the naked ambition and pure inflexibility required to be a Republican Vice President. That, and a willingness to torture foreigners in order to save fetuses, or however the logic goes.

2) The Heavens Themselves have already declared Shenanigans on this upcoming election.

Or rather, The Heavens, via Diebold.
.
Posted by Matthew The Astrologer at 9:53 AM

They say to improve the world, all you need to do is start with yourself. Have you improved yourself lately?

Palin is pro big oil. No surprise there. Alaska has oil. So let us not forget that Halliburton has a branch in Anchorage, Alaska.

Halliburton's major business segment is the Energy Services Group which provides technical products and services for oil and gas exploration and production.

And it is no secret that Cheney has been for a long time pushing for drilling in Alaska, a theme which continues to play out in a rather glaring way -- http://www.newsweek.com/id/154916.

Energy related wealth and Power-- it is all so interconnected for the US and other world players -- a global "game" played at terrific costs to others and our own people.